The Police in Katsina State, have arrested at least 12 suspected terrorists, armed robbers, vandals and other criminals in the state.

A victim of kidnap was also rescued in the process while 40 of his rustled cattle were recovered.

The Police Spokesman, SP Gambo Isah, confirmed this to journalists on Thursday, while parading the suspects before the command headquarters in Katsina.

He told journalists that at about 01:00hrs on March 20, terrorists stormed the residence of one Sada Kotoko (70yrs) at Barkiya village in Kurfi LGA of the state, kidnapped him and rustled 40 of his cows.

On receiving the report, operatives from the command responded swiftly and engaged the bandits in a fierce gun duel, thereby rescuing the kidnapped victim and recovering all the rustled cattle.

Some of the terrorists, however, escaped into the forest with bullets wounds.

In another operation on March 7, 2022, the command said it arrested an informant to the bandits, identified as Salisu Halilu, who had been terrorising Kurfi, Safana and Dutsinma LGAs respectively.

“In the course of investigation, the suspect confessed to committing the offence and further stated that he conspired with one (1) Yellow Auta Ring Leader (2) Babayye (3) Ado Tsoho (4) Sannu and other gang members now at large to rustle over 100 cows belonging to one (1) Malan Umme (2) Ali ‘m of Dagarawa village (3) Kabiru ‘m’ of Yar Barza village (4) Sule and others at Kudawa village of Kurfi LGA,” the statement read in part.

The suspect further confessed to being part of the terrorists that kidnapped one Alhaji Ibrahim Bello and receiving compensation of N100,000.

In yet another operation on March 12, SP Isah said the command succeeded in arresting a notorious thief, shop breaker and a vandal, Abubakar Saadu.

“Nemesis caught up with the suspect when he was arrested in Batsari town attempting to vandalise and steal away armoured cable wires from an MTN mobile telecommunication network mast located at Unguwar Dutsinma.

“In the course of the investigation, the suspect confessed to having conspired with one (1) Soja, now at large in carrying out this nefarious activity. He further confessed to have carried out series of other crimes of theft and vandalisation across the town,” the statement read. 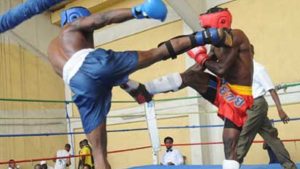 Police Kill Woman, Wounds Another Before Taking Own Life The Rivers State Police Command has confirmed the killing of three police officers who were on escort duty in Port Harcourt on Thursday. The incident

RRS Nab Leader Of Tricycle Operators, Four Others In Agege

The Rapid Response Squad have confirmed the arrest of the leader of the Tricycle Owners and Operators Association of Nigeria, Alhaji Azeez Abiola, and four