…We Will Hunt Down Assailants, Make Them Pay, Akeredolu Vows

Suspected terrorists are said to have attacked a Catholic Church in Owo, Ondo State.

Emerging reports suggest that many worshippers have died and several others have been left injured.

As at the time of filing this report, the authorities were yet to give a detailed statement regarding the development.

The President says only friends from the underground region could have conceived and carried out such a dastardly act, adding that eternal sorrow awaits them both on earth here, and ultimately in the hereafter.

President Buhari mourns the dead, and condoles with their families, the Catholic Church, and the Government of Ondo State, charging emergency agencies to swing into action and bring succour to the wounded.

“No matter what, this country shall never give in to evil and wicked people, and darkness will never overcome the light. Nigeria will eventually win,” the President said.

Recall that not less than 25 worshippers were killed by herdsmen who attacked a Catholic Church at Owo.

A top official of the Catholic Church in Ondo State put the number of those killed at 25.

It was gathered that many worshippers died and several others were injured in what looks like a bomb attack on the St. Xavier Catholic Church.

Also, Ondo State Governor, Arakunrin Oluwarotimi Akeredolu,SAN, is deeply saddened by the unprovoked attack and killing of innocent people of Owo, worshiping at the St Francis Catholic Church, Owa-luwa Street, on Sunday, his media aide,Richard Olatunde, said in a statement.

The vile and satanic attack is a calculated assault on the peace-loving people of Owo Kingdom who have enjoyed relative peace over the years, the governor said.

“It is a black Sunday in Owo. Our hearts are heavy. Our peace and tranquility have been attacked by the enemies of the people. This is a personal loss, an attack on our dear state.

“I have spoken to the Bishop of the Catholic Diocese of Ondo, Most Reverend Jude Arogundade, who is presently on his way to Owo. Similarly, I have had to cut short my party’s national assignment in Abuja and visit Owo immediately.

“This is an unexpected development. I am shocked to say the least. Nevertheless, We shall commit every available resource to hunt down these assailants and make them pay. We shall never bow to the machinations of heartless elements in our resolves to rid our state of criminals.

“I commiserate with my people in Owo, particularly families of the those who lost their lives to this ugly and unfortunate attack. I extend my condolences to Olowo of Owo, Oba Gbadegesin Ogunoye as well as the Catholic Church.

“I urge our people to remain calm and vigilant. Do not take laws into your hands. I have spoken to the heads of the security agencies. I have equally been assured that security operatives would be deployed to monitor and restore normalcy to Owo kingdom.” Akeredolu said. Falana, Adegboruwa Warn Against Hiring Mercenary To Fight Insecurity   The plan by the Kaduna State Governor, Nasir El-Rufai and other North-West governors to hire

Nigeria has moved to sixth position in the latest Global Terrorism Index (GTI), following successes in the fight against Boko Haram insurgents.   The country A driver, Christian Ogwuike, has allegedly knocked down a police inspector in Monkey Roundabout, Independence Layout, Enugu State.   In a statement on Saturday, the 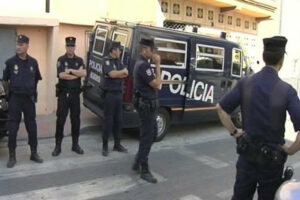 A man suffering from psychological problems shot and killed a farmer and a policeman in Spain Wednesday before being shot dead by police, local authorities