Spokesperson of the command, SP Chidi Nwabuzor, who disclosed this in a statement on Monday, November 21, 2022, said the suspects were arrested at their residence behind Wonder City, in South Ibie, Etsako West Local Government Area.

“Edo Police Command, on Sunday, November 20, 2022, arrested four suspects over armed robbery and unlawful possession of a firearm, one cut-to-size locally made pistol, 10 android phones and a motorcycle with Reg.No GDE 222-VC,” the statement read.

“The arrest was made possible following a well-laid ambush by the Divisional Police Officer, Agbede and his men alongside the local Vigilante which resulted in the arrest of the first suspect, one Umar Sanusi as he was riding a motorcycle with another suspect, one Boniface Junior currently on the run

“Investigation revealed that the motorcycle, with Reg/NO GDE-222-VC, was earlier robbed from the owner, one Abdullahi Nufu at gunpoint behind Wonder City

“A search warrant executed on the premises of the suspects led to the recovery of the cut-to-size locally made pistol, the android phones and the arrest of the three other suspects,” he added.

According to Nwabuzor, the Commissioner of Police, Mohammed Dankwara, has ordered the immediate transfer of the case to the State Criminal Investigation Department for a speedy investigation and prosecution of the case.

The CP also charged the relevant investigators and the surveillance unit of the Command to ensure that the fleeing suspect, Boniface Junior is arrested and brought to book as soon as possible. We’re Not Responsible For Beheading Of Anambra Lawmaker, IPOB Distances Self

The Indigenous People of Biafra, IPOB, has insisted its members are not responsible for the beheading of Okechukwu Okoye, a member of the Anambra State 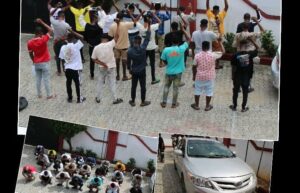 The Economic and Financial Crimes Commission (EFCC) has arrested 22 suspected internet fraudsters in Akwa Ibom State.   The young citizens were apprehended in a 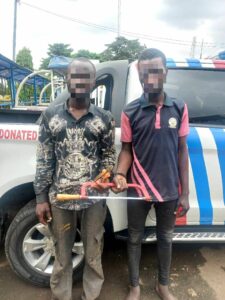 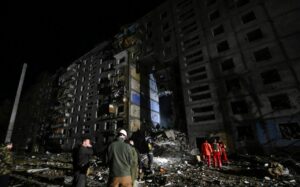 A Russian barrage pounded apartment buildings and other targets in the Ukrainian city of Zaporizhzhia, killing at least 17 people and wounding dozens, according to 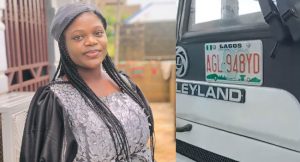