Yobe State Police Command has expressed worry over the rising level of drug intake among youths, which it said apart from causing health challenges, promotes crime and criminality in the society.

Assistant Superintendent of Police, Dungus Abdulkarim, the Command’s Public Relations Officers disclosed this in a statement  on Monday.

The Command, however, noted that its operatives are on the trail of the suspected owner of the exhibits,, assuring that sooner than later he will be apprehended and made to face prosecution.

“Drug intake and smoking of Indian hemp (Cannabis Sativa) embroidered our youth and as such lose the milk of human kindness in them and at slightest opportunity take to crime.

“The Yobe State Police Command had on 27th February, 2022, along with other sister security agencies, cordoned and searched an isolated building at the outskirts of Damaturu town.

“In the course of the search that lasted for about 30 minutes, 209 parcels of weed, suspected to be (Indian hemp) were recovered from the building, but the occupant of the house was not found”, the statement said.

“Meanwhile, the Command assures the State of its commitment in ensuring security and public safety, while the recovered substance will be handed over to the National Drugs Law Enforcement Agency (NDLEA) Yobe State Command for analysis and custody, pending the outcome of investigation”, it said.

The police in Kano State said they have rescued four victims of different kidnapping incidents and arrested 17 suspects. Spokesman of the command, SP Abdullahi Operatives of the Economic and Financial Crimes Commission, EFCC, have arrested 18 suspected internet fraudsters in Abuja.   The suspects were identified as Innocent Samson, 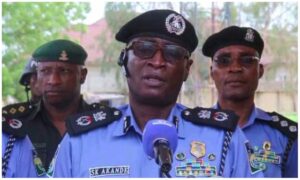 The Adamawa State Police Command has arrested 208 suspects since the beginning of January. The state Commissioner of Police, CP Sikiru Akande who stated this 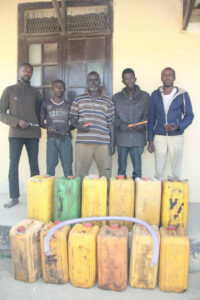 The Bauchi State Police Command has arrested two ex-convicts and two others for vandalizing eleven electricity transformers in Azare Katagum Local Government Area of the state. The State Security Services (SSS), on Thursday, withdrew a suit filed at the Abuja Division of the Federal High Court to detain the former terrorists’

Three brothers and their friend have been apprehended by the police “for carrying out series of robbery operations in Ijebu-Ode area of Ogun State.” The