Leah Sharibu easily qualifies as one of the most famous girls in the world, not by choice but happenstance. In short, she’s a child of circumstance. She became famous as a result of her decision to hold on to her Christian faith. Thus her fame is not borne out of notoriety but passionate commitment to her faith. She chose faith over freedom despite an offer of freedom after her abduction along with other schoolgirls by members of the Islamic West Africa Province, ISWAP terrorists group. By her unwavering faith, she has become both a national and international symbol of courage and resistance against the oppression of girls and women by the Islamist fundamentalist.

Indeed Leah is made in the same mould as the Nobel Peace Prize Laureate Malala Yousafzai of Pakistan who came to the global limelight after she was shot by the Taliban in the Swat district of Pakistan for defying their calls for girls not to go to school. Daily, Malala along with other girls would pick up their bags and walk to school in defiance of the Taliban order.  Angered by this, the Taliban shot her severally leaving her in a critical condition. She was later flown to the United Kingdom where she underwent several surgical operations before she finally recovered from her wounds. Now Malala has become a global icon and an activist for female education and freedom from oppression.

To recap, the insurgency in the North-East region of Nigeria took on another dimension in 2018 when ISWAP insurgents stormed Government Girls Science Technical College, GGSTC, Dapchi, in Yobe State and abducted over 100 school girls. Precisely, on February 19, 2018, at 5:30 pm, 110 schoolgirls aged 11–19 years old were kidnapped by the Boko Haram terrorist group from their school. The nation was shocked by the audacity of the insurgents. The abduction of the schoolgirls attracted global outrage and outcry. Once again, it revealed the rising level of insecurity in the land despite the yeoman efforts of the Armed Forces to curb the activities of terrorists.

Of course, it reminded the nation of the abduction of the Chibok girls from Government Girls Secondary School, Chibok in southern Borno State in 2014. At that time, the Goodluck Jonathan administration was excoriated for failing to foil the kidnap of the girls and rescue them. This put the government in the spotlight of global infamy and the opposition latched on to this to describe the administration as incompetent and clueless.

However, after the Dapchi schoolgirl’s abduction, the Federal Government deployed the security agencies to search for the missing schoolgirls and to hopefully enable their return. Then governor of Yobe State, Ibrahim Gaidam, had blamed the Joint Security Task Force for removing a military checkpoint shortly before the terrorists struck at GGSTC, Dapchi. Dapchi lies approximately 275 km northwest of Chibok, where over 276 schoolgirls were kidnapped by Boko Haram in 2014. Five of the Dapchi schoolgirls died on the same day of their kidnapping.

Thereafter, the government started negotiations with the terrorists to secure the release of the abducted girls. The painstaking negotiations later paid off with the release of the 108 abducted girls. However, one of the girls, Leah Sharibu stood out among the girls for she rejected attempts by the terrorists to renounce her faith and convert to Islam before she would taste the air of freedom. Thereafter Boko Haram released everyone else in March 2018, save Leah Sharibu who refused to convert to Islam. Leah like some of the Old Testament prophets held on to her faith in the face of terror, saying she would not renounce her Christian faith for freedom.

Afterward, the Federal Government had promised to rescue her from bondage, but it’s clearly four years since she was abducted and it appears as if the government’s effort has not yielded any positive result in the bid to help her regain freedom. Instead, the ISWAP has reportedly turned her into a sex slave and she has also given birth to two children in captivity having been married off to one of the terrorists.

However, the abduction of the Dapchi schoolgirls could have been averted if only the Safe Schools Initiative Programme of the Jonathan administration was faithfully implemented after the abduction of the Chibok girls. As usual, the initiative launched with fanfare later suffered a setback due to a change in government.

On his part, President Muhammadu Buhari had promised to rescue Leah Sharibu, the only girl in Boko Haram captivity after the Dapchi schoolgirls were freed by their captors.  Buhari made the pledge at the Grand Finale of the 2019 Nigerian Army Day Celebration and Combat Support Arms Training Week at Ikeja Cantonment Parade Ground, Lagos, represented by Vice-President Yemi Osinbajo.

President Buhari said, “The challenge for us is to recognise this sick extremism of Boko Haram for what it is and form alliances across faith, ethnicities, to destroy an evil that confronts us all. “We want to reassure the affected families and friends that this administration will not relent in its efforts to bring back all the remaining girls including Leah Sharibu, who has become a poster child for the heinous activities of Boko Haram insurgency. “We will reunite them with their families and friends by the Grace of God.”

At the same time #BringBackOurGirls movement has been in the vanguard of the campaign for the release of Leah. In August 2018, the movement followed news of a recent audio recording and photograph of Leah Sharibu released by the online medium – The Cable attributed to Ahmed Salkida, a journalist who frequently reports on the North East terrorist war.” Leah’s father, Mr Nathan Sharibu confirmed the identity of his daughter.

In the audio a young woman who introduced herself as Leah Sharibu said the following in Hausa Language:
“I am Leah Sharibu, the girl that was abducted in GGSS Dapchi. I am calling on the government and people of goodwill to intervene to get me out of my current situation…I also plead to the members of the public to help my mother, my father, my younger brother and relatives. Kindly help me out of my predicament. I am begging you to treat me with compassion, I am calling on the government, particularly, the president to pity me and get me out of this serious situation. Thank you.”

Also, the movement had expressed its displeasure over the insensitivity of the Federal Government- and especially the Presidency – to the plight of Leah Sharibu and her parents. It added that there is no excuse worthy of any consideration that the government of President Muhammadu Buhari can offer to attenuate their failure to rescue Leah Sharibu.

Furthermore, the movement declared “Why is the young woman who stood on her conviction abandoned by her government in the hands of terrorists? What is Leah Sharibu’s offence that made the Federal Government accept a negotiation that included her being left behind when others were rescued? When was the last time the Federal Government provided updates on tangible efforts to rescue Leah Sharibu to her parents and the Nigerian People beyond the recent abdication of that duty to God by the Presidency? Does the unfair treatment of Leah Sharibu not again raise questions of inequity in the actions of this administration?” We ask again, “Where is Leah Sharibu and when will she be retrieved from her captors like her classmates, Mr President?”

Also, Transforming Uplifting and Reforming Nigeria (TURN) is concerned about the plight of Leah Sharibu and would like to raise worldwide awareness about her continuing abduction by Boko Haram. TURN is interested in working with Nigerians from all walks of life to effect Leah’s release.

Ordinarily, Leah ought to have completed her secondary education and maybe gone ahead for further studies in the university. Now, her education has been truncated and her life thrown out of gear. What’s more, she’s now saddled with two unwanted babies, products of a shotgun marriage to a terrorist. Indeed fate has dealt her an ugly card. Her dreams have been aborted mid trajectory. Definitely as a girl of strong faith she will overcome because faith will eventually trump adversity.

Finally, four years after her abduction, and with several broken and unfulfilled promises made by the government to rescue her, Nigerians remain resolute that Leah Sharibu will regain her freedom sooner than later. Despite her travails, Leah Sharibu remains a significant symbol of resistance against Jihadist terrorists.

King is a journalist and novelist. He can be reached via @veritypublishers.co.za 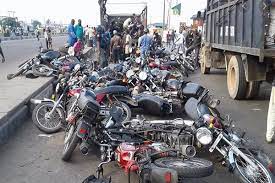 With the total ban on Okada in Lagos by Gov Babajide Sanwo-Olu, if you are passing through Surulere, Apapa, Lagos Island, Ikeja, Eti osa just Ogun State Police Command has denied the allegation that its men shot a 25-year-old student of the Federal University of Agriculture, Abeokuta, Bakare Samuel. 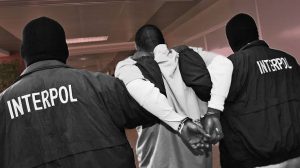 President Muhammadu Buhari’s home state, Katsina, has been attacked again by terrorists.   The gunmen according to reports, killed two men of the Nigerian Army 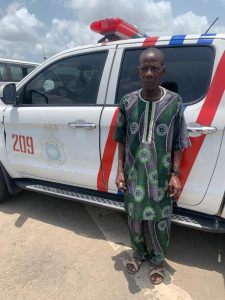 Men of the Rapid Response Squad (RRS) of Lagos State Police Command have rescued a 67-year-old man who attempted to commit suicide on his birthday.